Yoga is a sanskrit word. It translates as union, or bringing things together.

Yoga is one means by which we can connect with Om, the universal vibration that links all people and all things, and bring it all together.

Yoga ‘in the altogether’?

Why chose Altogether Yoga, rather than one of the other sessions? 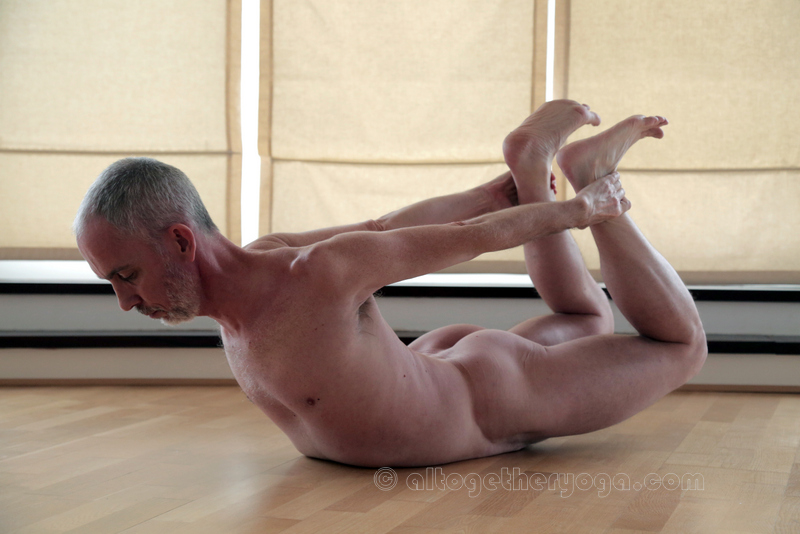 What sort of yoga do you teach? The easiest answer to that is “your yoga”, because my teaching is grounded in offering my students guidance in how to shape their own practice according to what they feel they need and would like.

Safety is also a fundamental element. Numbers of injuries sustained during yoga are increasing, not least because numbers of people doing yoga are mushrooming, so one of my focuses is to help my students explore and celebrate their abilities without pushing things too far too fast and thus causing themselves harm.

Is it Hatha yoga? Yes, because hatha, which translates from its original sanskrit as vigourous or intense, is widely used to describe any form of practice that includes poses/postures (asana) and breathing techniques (pranayama). Many of the more popular styles of yoga are forms of hatha, including:

What is ‘partner yoga’? It’s the practice of working in pairs or small groups. There’s no need to arrive with a partner… you’ll be paired up with other men during the session. Most of my classes include partner poses because it’s very valuable to see your own movements reflected in others. It helps build trust and self-confidence. It also makes a very direct connection with one of  yoga’s guiding principles: connecting with yourself while at the same time connecting with the people and things around you.  And it’s fun.

Simply… The idea of connection also underlies the simplicity of this website. Connection is easier when things are not made unnecessarily complicated. You may have noticed that there is no Altogether Yoga logo. What purpose does a logo really serve? Similarly, I try to minimise my use of sanskrit terms, which are popular in some yoga circles. Yoga can be a precise and challenging discipline, both physically and mentally, so why complicate it further by communicating in two different languages at once, one of them virtually dead?